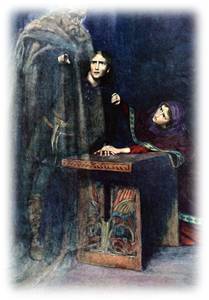 Who'd have thought that beneath the shadow of the ultra-modern Natwest Tower there lurked the ghosts of England's most haunted city? Katie Aston steels herself and joins The London Ghost Walk to discover the chilling secrets of the city's hidden alleyways.

It was a damp and chilly Sunday evening, and instead of spending it curled up in front of the telly I was loitering around the Bank tube station. Not exactly normal behaviour for me, but then, as I soon discovered, this was not going to be a normal kind of night. There were a few of us lurking about actually, not sure what we were waiting for, but not brave enough to ask each other. Personally I was there for the London Ghost Walk. The leaflet I'd picked up had told me to expect a few surprises, so I was almost prepared for our guide to appear in a puff of smoke. It was quite a disappointment when instead a cuddly little man shuffled up in a black cloak and squiffy black tie and asked if I was with the tour. He introduced himself as the very un-spookily named Richard Jones and wandered off to round up the other victims.

We were a group of 13. 'Ooooh, unlucky for some,' grinned Richard and we all laughed nervously. He explained to us (mostly American tourists, one young family and me - an ignorant Londoner) that the tour would last about an hour and three quarters and would take us through the alleys of the old city, which were steeped in history. The first journey he required us to make was more difficult for some than others. We were asked to make a leap of faith, leave our cynicism behind and try to believe that there might actually be ghosts out there - although he couldn't guarantee we'd see one. I'm a classic borderline skeptic, but standing there in the dusk on the deserted streets of the City I started to feel the hairs on the back of my neck stand up. Maybe I wasn't as brave as I thought.