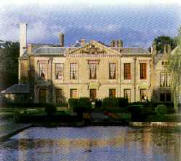 Originally a 12th century monastery, this four star hotel was lived in for 300 years by the Craven family. During their residency, a gypsy fell pregnant by a family member and had a stillborn child. Angry and bitter, she placed a curse on the family inflicting a lifetime of premature death upon the eldest sons. Consequently most have not lived past middle age. Today the hotel boasts frequent reports of unexplained draughts, random door slammings and a mysterious presence. The building's nocturnal activities have caused several guests to run out of their rooms.