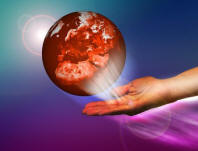 Most people know what "sign" of the Zodiac they are "I'm an Aries", they say, "I'm a Taurus"- but what does that actually mean? It’s really very simple. Astronomy tells us the Earth on which we live revolves once around the Sun in one year (along its orbit) In fact this is just what a "year" is! But to us, based on planet Earth, it seems we are the centre of the universe and the Sun that revolves around the Earth. If we adopt this view, then the Sun appears to be in a certain part of the sky at a certain time of year. This apparent path that the sun follows astronomers call the "ecliptic" Astrologers, divide this path into twelve parts, or "signs". The Sun's apparent path, so divided, is called the "Zodiac".

So, if you were born in April for example, then the Sun would have been in the sign of Aries at that time, so you would be an "Aries" or, as an astrologer would say, your Sun-sign is Aries. If you had been born in May, your Sun-sign would be Taurus. Actually, this is not quite accurate because the dates when the Sun enters a particular sign do not correspond exactly to the beginning of the month, and can also change slightly from year to year. Here is a list of the twelve zodiac signs, their astrological symbols, and approximate dates:

These dates vary slightly from year to year because of the astronomical characteristics of the Earth's orbit around the Sun - but they are a good general guide.

As the Zodiac is circular and apparently encompasses the heavens, it can be divided into 360 degrees - which means that each of the twelve signs will be 30 degrees each in length. So the position of the Sun can be measured - for example, 15 degrees and 20 minutes of Aries, or perhaps 10 degrees and 40 minutes of Gemini.